Letter from the Rector #1: Only Catholic Education is Real Education 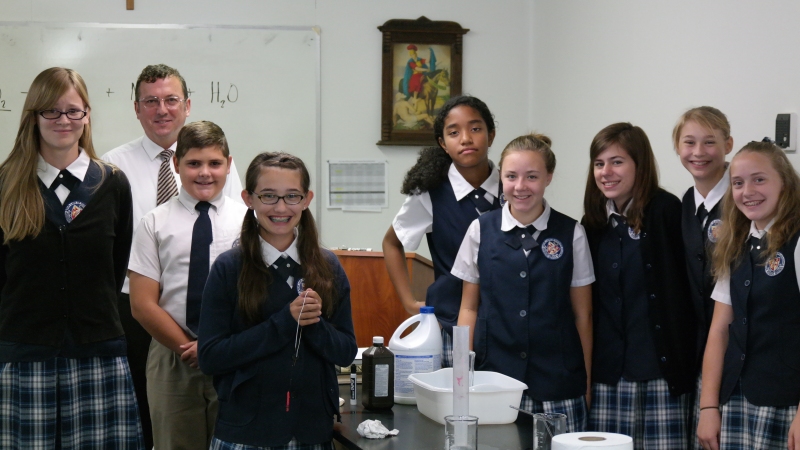 Once, at a public event, I was speaking to a man whom I had not previously met, a Catholic father of a large family. He was complaining to me that his older children were giving in to the pressures of the world, and some had stopped practicing their faith. He said me, “I don’t understand it. We did everything right. How can they lose the faith when we did everything right?” I expressed my sympathy and encouraged him not to give up on his children, but I was thinking to myself, “I have to doubt that you did everythingright.” The evidence supporting my conclusion appeared just a few weeks later. I saw the man out in public with two of his high school-aged daughters. Both girls were wearing sweatshirts bearing the logo of the local public school, which they clearly attended. It is not at all surprising to see children subjected to years of non-Catholic and anti-Catholic schooling lose the faith and it is something we priests witness with distressing frequency.

“For what shall it profit a man, if he gain the whole world, and suffer the loss of his soul?” (Mark 8.36) There is only one goal in human life: eternal salvation. To risk it for anything, even for “the whole world,” as Our Lord says, is the greatest foolishness. Education is meant to prepare a child for his future life as an adult in this world. If this adult life has as its goal eternal salvation, every education worthy of the name must have this as its exclusive focal point and as the guiding light of every discipline. Yet, how often we encounter Catholic parents who put their children into schools that take no account of life’s supreme purpose! “Well,” they say, “we have to think of college and career.” Even if a non-Catholic school bettered prepared your child for future professional endeavors (which I do not concede), and even if it enabled him to attend an Ivy League school and makes millions of dollars, these would be small consolation during an eternity in hell. Of course, not every child who attends a good Catholic school will be saved, and not every child who receives a non-Catholic education will be damned, but the one with a true Catholic education has a tremendous advantage in this regard. You would think this would be obvious.

Condé B. Pallen, Catholic author and journalist, wrote, “…our life here is a probation for the hereafter, and the whole course of this life should be determined by its final end. Now I hold and urge that as education is a most important, indeed the most important phase in the process of our temporal development, it should be vitally informed by that principle.” It just makes sense. How can the process of developing the mind and character of child fail to take into account his very reason for existence and still be of real value? The way to eternal life is not an easy one. “How narrow is the gate, and strait is the way that leadeth to life: and few there are that find it,” said our blessed Lord. The period of a child’s preparation for life must be focused on giving him what he needs to reach the next life, or his time has been wasted. More than that, he will be handicapped by having imbibed principles from secular education that are opposed to the attainment of the ultimate end.

The Church has long since pronounced upon these matters. Pius XI, writing in 1929, had this to say: “…the so-called ‘neutral’ or ‘lay’ school, from which religion is excluded, is contrary to the fundamental principles of education. Such a school moreover cannot exist in practice; it is bound to become irreligious. There is no need to repeat what Our Predecessors have declared on this point, especially Pius IX and Leo XIII, at times when laicism was beginning in a special manner to infest the public school. We renew and confirm their declarations as well as the Sacred Canons in which the frequenting of non-Catholic schools, whether neutral or mixed, those namely which are open to Catholics and non-Catholics alike, is forbidden for Catholic children…”1

If it was true in 1929, how much more does it apply to our far more perverse and anti-religious days? A Catholic education is not one option among others. It is essential to the proper formation of a Catholic adult, and Sunday catechism classes cannot compensate for its absence. I realize that I am preaching to the converted; you have your children in a traditional Catholic school. Nevertheless, we need to remember why we make such sacrifices to provide our children with this education. The Catholic school has an irreplaceable influence on the future lives, temporal and eternal, of the children God has entrusted to us.